What is CubedCon:
CubedCon has been an event in Minecraft that is kind of like a bad attempt of MineCon..
They have around 100 = 300 players join every year and build booths around the server to advertise there content.. for example. You can pay them around $40 and have a small area to build in so other people who are also doing the same thing can see what you’re up tp.. wow typing that sounds sad lol..  anyway we have taken part in this event before because it seemed like a good cause, Build a booth, share with the community and help to raise money for there chosen charity. they seem to be raising less each year now too, read below and I’m sure you’ll understand why.

Why FloydCraft will not be involved with CubedCon 2019:
We have bought Large Booths at both the 2017 and 2018 event and both times we have had problems with there staff, First of all The staff are extremely incompetent.
They say something will happen at a set time and it very rarely has in the 5 years I’ve attended.
more than 50% of there panels end up getting pushed back for some reason or another and it was frustrating to the large amount of there attendees, especially from what we saw in our Cubed Channel in our own discord.
The first year we bought our booth was 2017, The Halloween Event.
The event its self was great with the exception of pretty much everything being delayed for some reason or another but the build server is where
you can see how under qualified there staff are!
for example in the year 2017 we noticed a huge exploit they had.. you could use World Edit outside the build area and break everyone’s builds!
if i had wanted to i could have gone into the sky and done //cyl lava,water 1000 and froze the entire thing and damaged all the booths in the
process! Anyone could have if they had a booth! and then we told them about it and they muted me.. for reporting a bug on there server that was a
huge problem.. and they did not fix it that whole year!
as well as that we was told we could use Player Heads to decorate with and so we did.
they advised there was no limit and we could use as many as we wanted within reason. We placed 40 heads and they started removing them.
they didn’t message us in person at this point, they left a sign at our booth saying not to use too many heads, so we didn’t, we used around 20 that first year.
Even though I was on a Intel HD card that gets on average 30FPS and it was getting exactly 30FPS they said they were too laggy and claimed they had  good graphics cards but not all players will, yet there cards that were apparently too bad to go near our booth but there cards were better than mine, not even an Intel on board. Obviously they complacently lied to back up there argument so we would just remove them to avoid more arguing even tho tal was very angry and was ready to go out killing lol. (not literally ofc)
anyway we did as they asked and that year went by, CubedCon 2018 was coming up, So again we bought a Large Booth, this time larger than the last!

We spent way over a month building it, the build server was open a very long time due to the event getting pushed back.. again.. the staff had
mentioned on Discord that there were No limits on heads this year! that is exactly what they said and many of the staff watched me place them.
I even got told by there staff that things looked great, and then the same thing happened, all our heads were too laggy apparently and we had to
remove them, we counted the heads and we had a total of 42 at the time which was just stupid that they would do that, especially after
advertising a no limit on heads!, and then to back there argument up they changed the rules on discord! of course as you can imagine we argued and a lot of us were a lot more angry than me, personally i taught it was a bit prosthetic and petty of the Cubed Staff but we did as they asked as we
didn’t need to argue with them any more.
The most annoying thing about it was that many of the staff watched us place the heads and even complimented it, they had many opportunity’s to say not to but they waited until we had spent months blending them in.
After Cubed started there were many issues other than the panels getting pushed back and they neglected to put anything on there website
timetable. And then when they did it was almost over and they were still late! it really seems like Cubed is becoming a Joke.This year we got
lucky and pulled out before we had to deal with there bullshit again, After we applied for our booth they got one of there pet staff to message
me asking if they will have the same problems from us this year.
Funny enough all the problems were caused by there incompetents! The Staff didn’t warn us about anything we were doing whilst doing it and we
literally followed the rules at that time, all we did was argue back a little in a professional manor as it really is ridiculous that they would
even do that in the first place. and for them to ask us if were going to cause problems i told them to just decline out application, The next
thing was pretty Funny, After i told them to decline it, they said to me “we don’t think FloydCraft should be involved with Cubed anymore”..
sentence flipping skills 10/10 [xD]
That is Why we will not be attending this shoddy event this year and we urge you all not to attend aswell, the staff are making it a poor experience
for everyone getting involved and raising pretty much nothing for there charity Special Effect.. they used to make a good £1000 + but not any more
and i can see why, they pretty much threw there money away messaging us about things from last year that were there own problems anyway.
they act as if there a huge corporation that’s making a huge difference, There is So much that needs to change before the event is worth attending it
simply wont happen with there current staff.
R.I.P CubedCon – once it was good..ish.

See Screenshot of Message there pet staff sent when we applyed for 2019 Below: 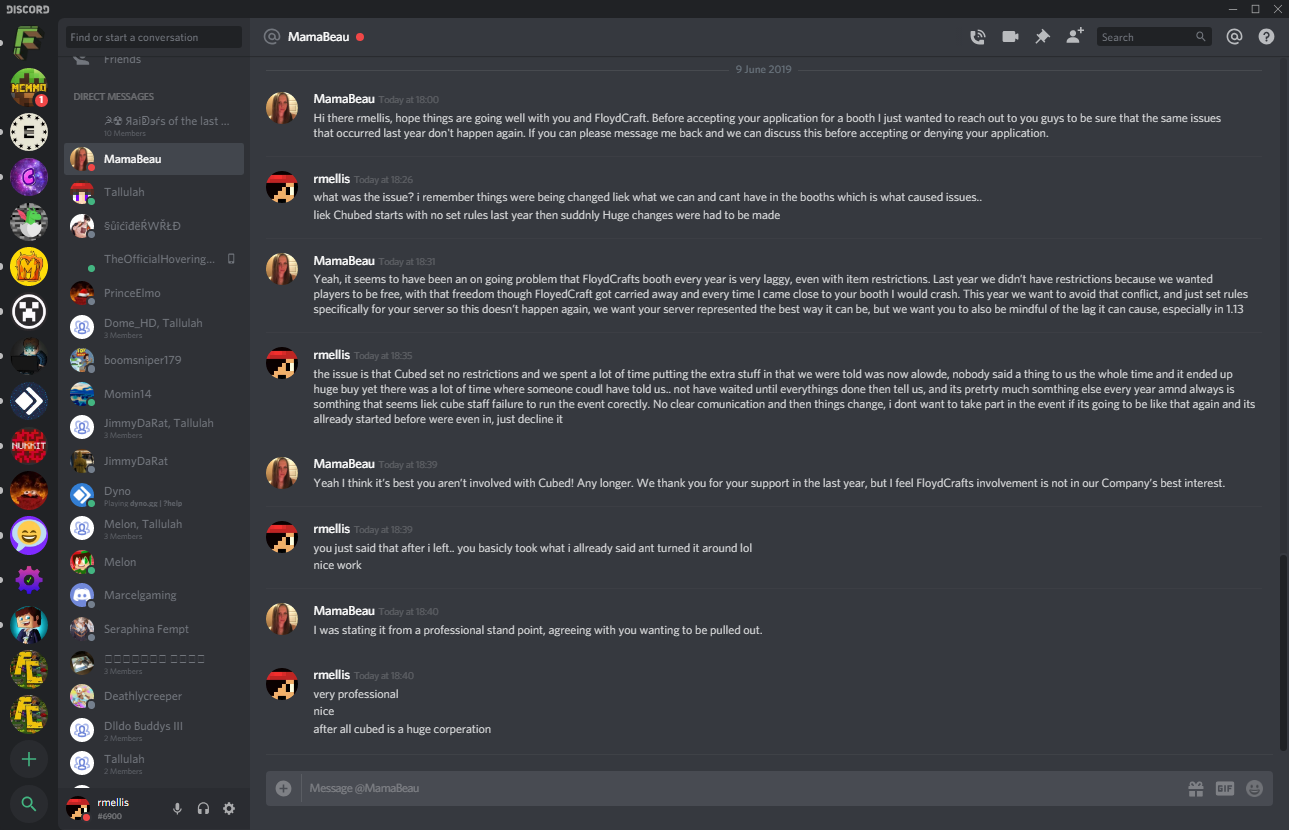 In all Seriousness tho. This entire event is now a joke, it takes place every year to help rise money for a charity called Special Effects that make strange bulky controllers for disabled kids.. That’s right, a charity that does what any game company That is interested in making money does..

during  the event they Live Stream the panels and as i said already not one of them was onetime last year except the first one of the day!
There time keeping is atrocious and the entire event is like a child is running it, If your between the age of 1 – 10 you can be a Cubed Admin easy! you’ll be overqualified 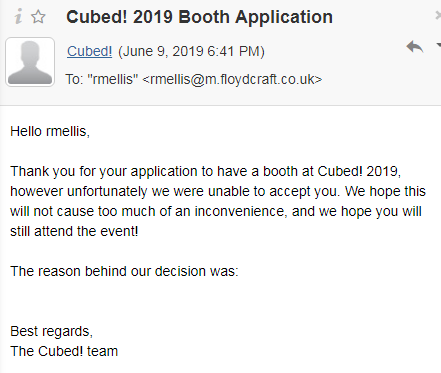 Absolutely no information at all..
in all Avoid Cubed, its just a joke and not worth the time, let it die out at the back of the internet.
R.I.P CubedCon